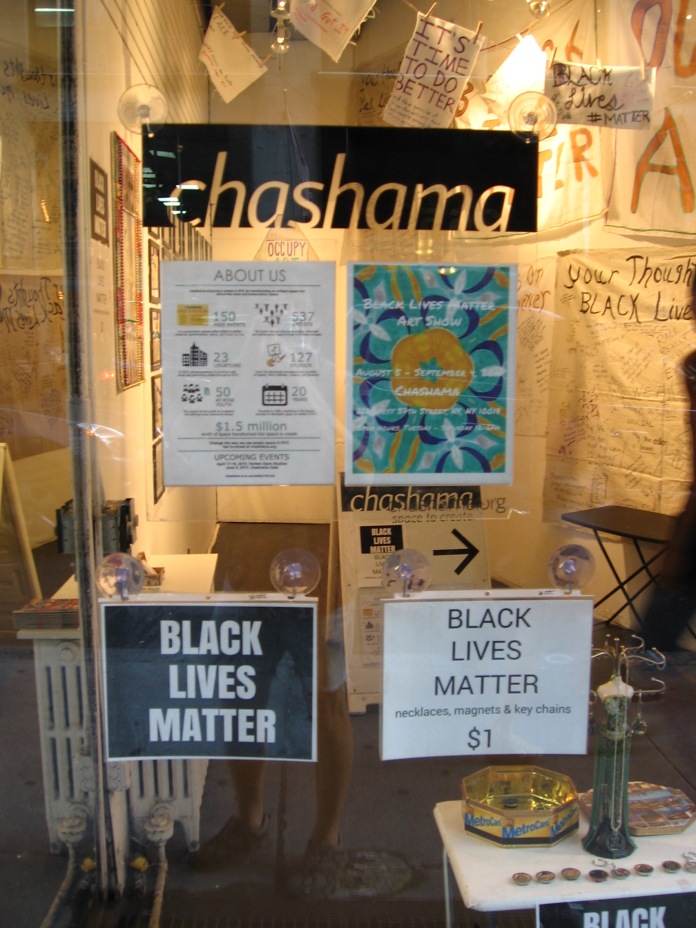 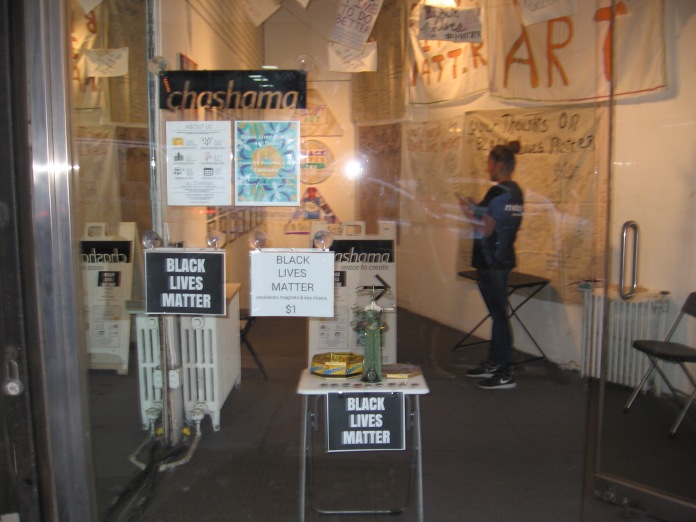 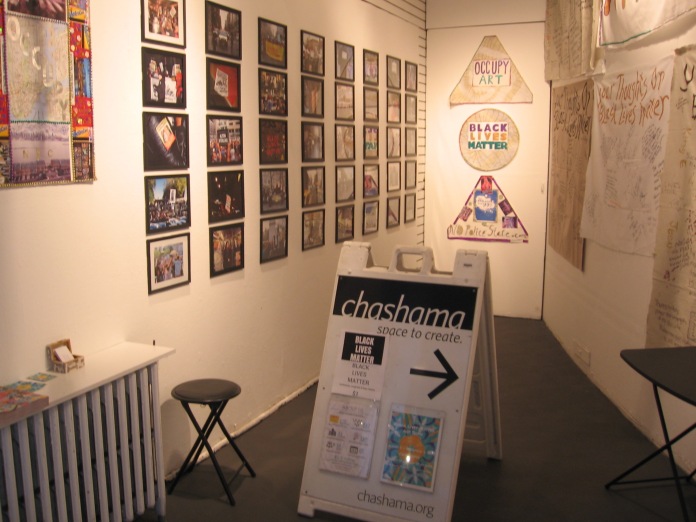 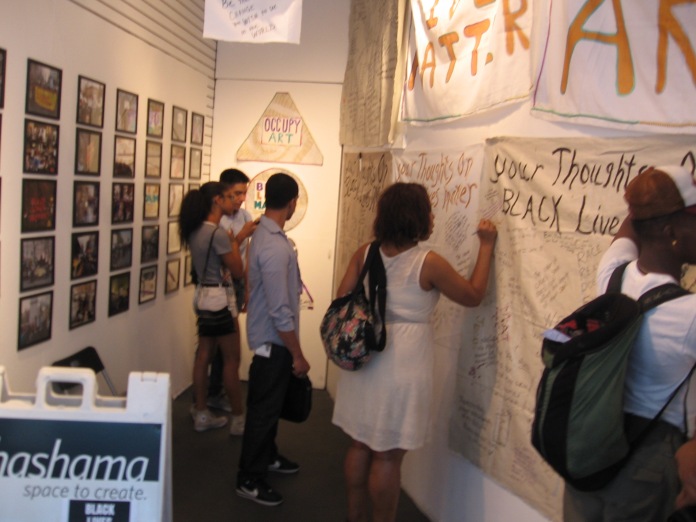 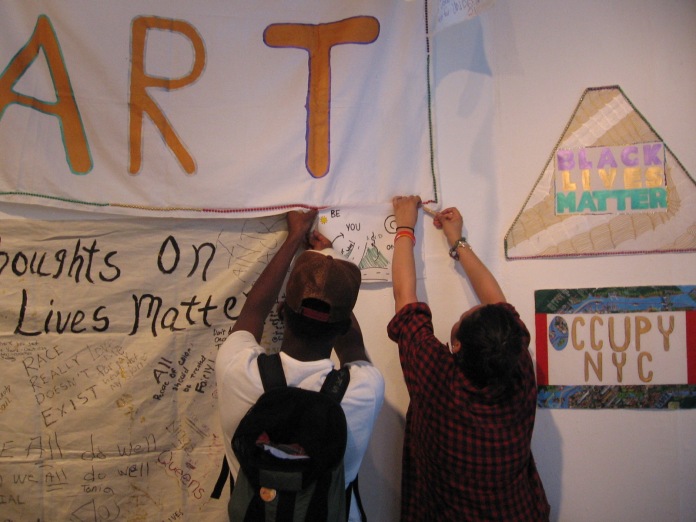 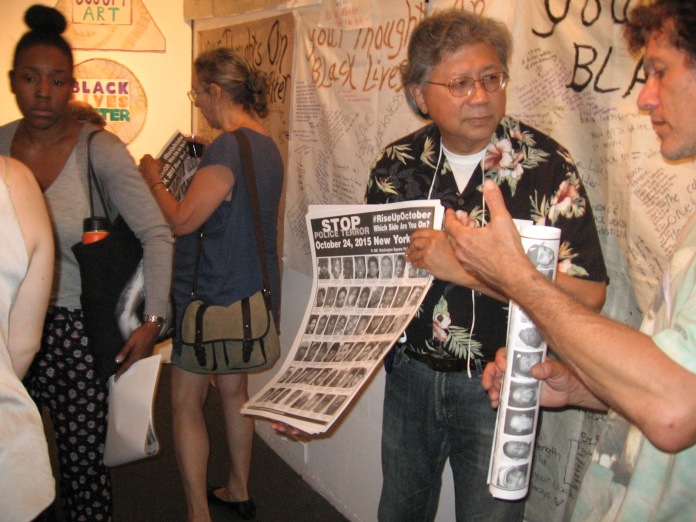 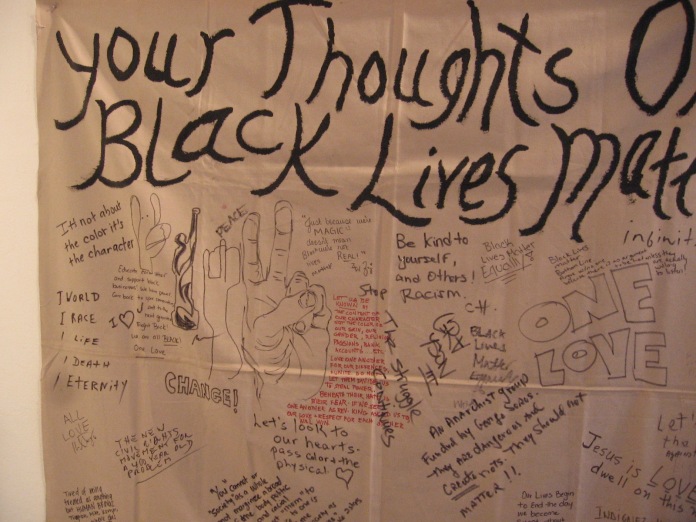 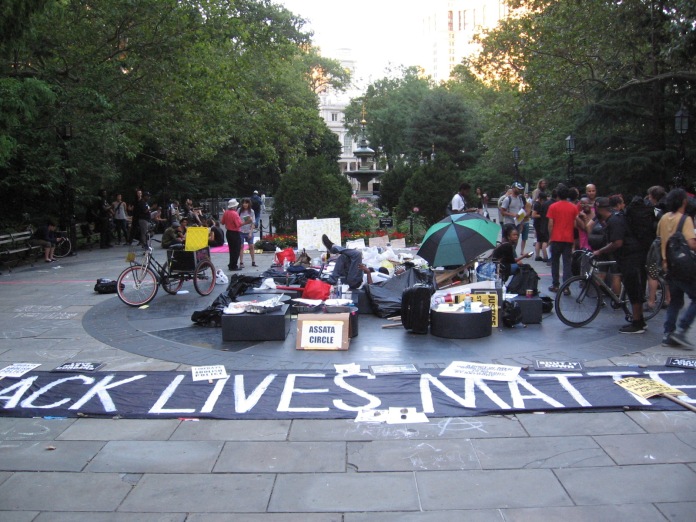 Opening Reception & Performances: Friday, August 5, 6-8pm
A performance by both Carla Cubit of Occupy Art and a speaker from The Stop Mass Incarceration Network, followed by an Artist Talk & Discussion.

(For the most up to date event information visit http://www.chashama.org/event/black_lives_matter_art_show)

“Expand scope, perspective, and inspiration towards an ongoing series of future culture jams and events around this theme and time.” During Open Hours (see above), all are encouraged to come talk about the Black Lives Matter movement and are invited to create their own posters/Black Lives Matter inspired artwork (art materials and supplies provided).

Handmade Black Lives Matter necklaces, magnets, and key chains will be on sale for $1 during the Opening Reception and all Open Hours.

About the Artist
Carla Cubit’s creates small mixed media assemblage pieces using found objects and materials–often discarded hardware and recycled objects. She weaves tales from castoffs found in the streets. Her works are “highly visionary in nature.” A former resident of the East Village in New York City, Cubit’s artwork has shown in galleries and other venues in NYC. Recently her works have been inspired by the Occupy Wall Street and Black Lives Matter movements. Cubit finds that there is no separation between her daily life and her creative outpouring: “I love the arts in whatever medium it may be; music, theater, dance etc; and I believe in religion, mysticism and the secret meaning of the unknown and art as a universal means of communication.”

About Occupy Art
“We are the 99%.” Visit Occupy Art, to learn more about past Occupy Art and Black Lives Matter Art Shows.
http://occupyart.org/

And thank you Travis Morales and Stop Mass Incarceration Network for speaking at and bringing literature to this event.

And there were or are, DecorForU #blacklivesmatter, #occupywallstreet, #berniesanders and more necklaces, magnets and key chains being vended for $1 each as part of this reception and event also.
And there were also thoughts, thoughts and more thoughts, almost too many to mention and type on this blog post that were written and shared on those “Your Thoughts On Black Lives Matter Banners” as in some of those photos and videos that find themselves posted above.  And some of those thoughts written were:

1.  My Life Matters
2.  Listen, do you want to know a secret?  All Lives Matter.  Stop the hate.
3.  (in response to #2), yet this totally disarms #blacklivesmatter and continues the hate.  Ironic.
4.  Let’s be clear.  Black llives have always mattered.  What the Black Lives Matter is saying is that black lives in the judicial system are not being recognized as life lost.  Legally we stopped being property less than 200 years ago.  So since we are free black & magical – are we less protected by law because we are no longer property. Black Lives Matter is all you ever need to know.  #______ my life matters.
5.  If we don’t get justice they wont get no peace.
6.  Love your blackness.
7.  I love black people
8.  We are one.  No one is different.  All the same.  Same love.
9.  Fight the good fight.
10.  Keep fighting.  Keep loving.  Freedom is the soul of equality.  Do not rest until we are all equal.
11.  The people united will never be defeated.
12.  You are my brother.  You are my sister.
13.  Jesus Loves Black Lives.
14.  Focus on the progress.  Not hate.  Otherwise they win.
15.  It’s so sad that even in 2016 we are still living in a white supremacist capitalist colonial patriarchy where people of color are routinely silenced and murdered.
16.  A white male police officer told Karyn Gains “I can’t believe you’re raising your kids this way”, meaning raising them to defend themselves and resist police violence.  5 months later, she was murdered in her home and her son was shot by police.  When will we stop blaming people of color for their own victimization under white supremacy.
17.  We are a billion cells of pure knowing.
18.  Black Lives Matter
19.  All Lives Matter (in response to #18).
20.  Together we can
21.  Jesus
22.  No God.  No Peace.  Know God.  Know Peace.
23.  There’s history, power & strength of my skin color.  Always love your black in all ways.
24.  Step the fuck up white people.
25.  My life does matter and my skin is beautiful and important.
26.  My skin color is beautiful.
27.  Black is beautiful.
28.  Silence is not an option, but listening is just as important.
29.  Race is a social constraint that we reaffirm everyday.  It is in out power to change the status quo.  Love is love is love.
30.  The color of my skin does ot make me inferior.  It makes me beautiful.
31.  We all feel and feelings have no color.
32.  The skin i’m in is beautiful, bold, black.
33.  All people of color should be treated fairly.
34.  Color is just a refraction of lights, length received by our eyes, what should count is what’s in our souls.
35.  Black Love Matter
36.  Every place where you set your foot will be yours. – Deut 11:24
37.  A 5 year old child understands this you would think all adults would.
38.  If you are neutral in situations of injustice, you have chosen the side of the oppressor.
39.  The character of a man is now where he stands in times of peace, but where he stands in times of strife & turmoil.  Where do you stand?
40.  Under skin we all bleed red.
41.  Jesus is love.  Dwell on this notion!
42.  Skittles + hoodie = armed + dangerous.  R.I.P Trevon
43.  Inequality is a historical & social product of society, classified by color.  It is out moral obligation to keep fighting until we truly reach equality & justice.  A revolution has to happen now.  Keep fighting.
44.  We are people.  We have families.  We exist.
45.  Let’s keep the fight against injustice.
46.  our lives begin to end the day we become silent about things that matter. MLK Jr.
47.  Be kind to yourself, and others! racism.
48.  Just like black is the combination of all colors of the spectrum.  So are black lives.  So when we say black lives matter we are saying black trans, black gay, black women, black children, black men, my black is all of that.
49.  “March through the streets”.  I’m willing and I’m able.  Categorize me and I defy every label.  #blackgirlmagic, #carefreeblackgirl, #blacklivesmatter
50.  Fight the power! Transform the people for revolution.
51.  #Hands Up Don’t Shoot!
52.  Let us remember that Dr. King was hated by the government.  Be flexible.
53.  ONE LOVE
54.  Change!
55.  Justice
56.  It’s not about the color, its the character.
57.  1 world, 1 race, 1 life, 1 death, 1 eternity.
58.  500 years later and we’re still trying to make this point?!  We need to come together and heal now.  Educate about the true history.  Share stories.  Work for change.

And as seen in some of those photos from some of those Black Lives Matter protests in the New York City area to found on that Black Lives Matter Art Show wall, Millions March NYC is having a Shut Down City Hall NYC protest at City Hall in New York City if you happen to be in the area, today being Sunday, Day 14 of their Abolition Square, City Hall Park event. And part of their Shut Down City Hall Facebook event invite reads as follows:

Approaching the 2-year mark of the Ferguson Uprising on August 9, Millions March NYC is calling for the OCCUPATION OF CITY HALL PARK starting Monday, August 1, 2016 at 9 AM. It is time we escalate our organizational tactics against this racist system, which continues to execute Black & Brown people with impunity—most recently #DelrawnSmallhere in East New York, Brooklyn. 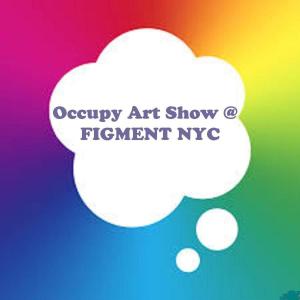 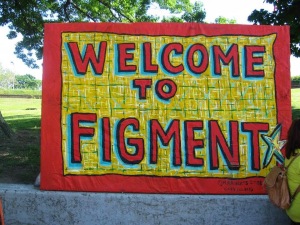 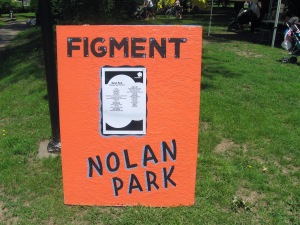 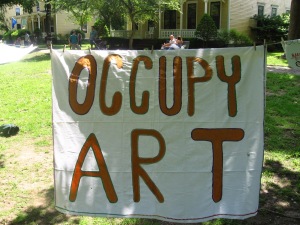 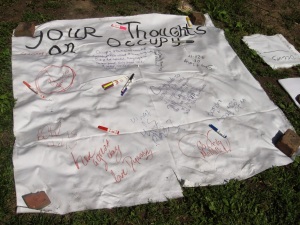 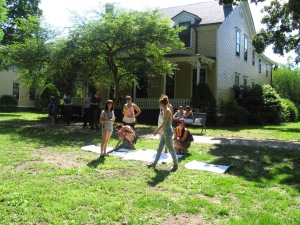 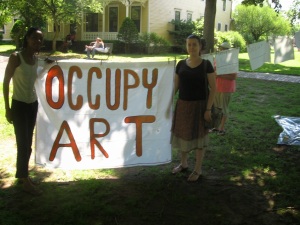 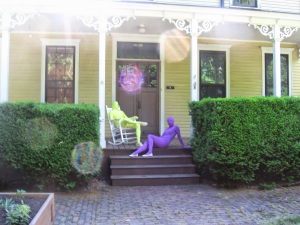 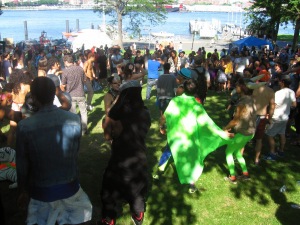 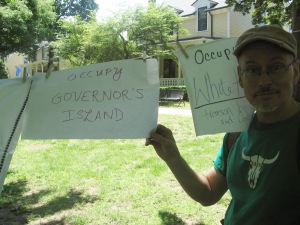 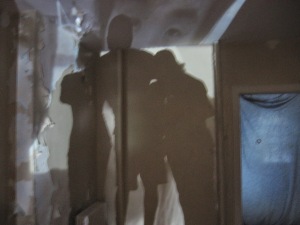 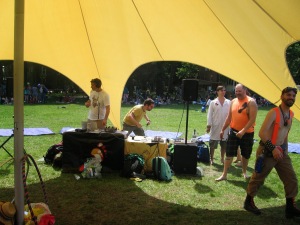 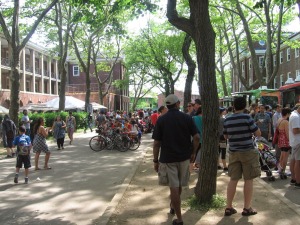 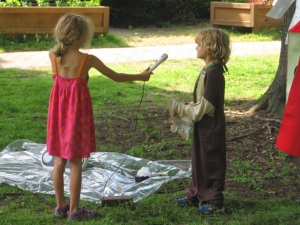 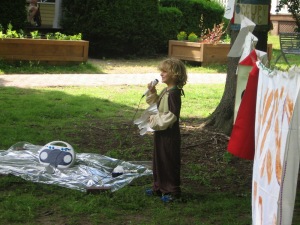 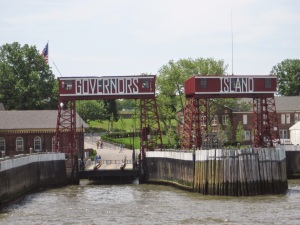 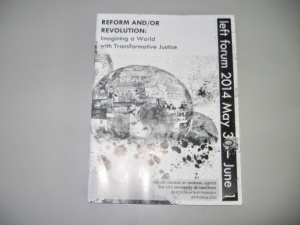 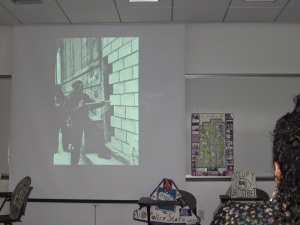 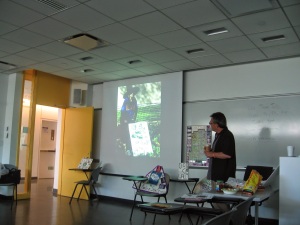 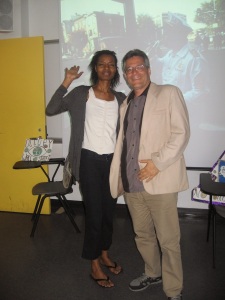 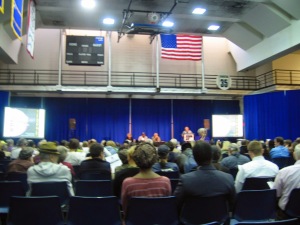 Well that Occupy Art Panel at Left Forum at John Jay College of Criminal Justice in that city of New York that I blogged about a week or so ago happened a few days ago. And according to Left Forum, this was their best conference to date. And from what I saw during my time there, despite a panel speaker being missing in action who did not make it to that Occupy Art panel on this day, it was Paul DeRienzo of Let Them Talk who saved the day with his squatter history slide show for the few people who were in attendance. And that slide show was all things squatting and art. And if it wasn’t for Paul and his slide show, that “There will be a slide show presentation of Occupy artwork as well as Lower East Side, NYC Lower East Side Squat History zines” part of Occupy Art’s panel description would have just been false advertising and may not have happened. And so how did the rest of that Left Forum conference go on the last day of their three day conference one may ask, maybe? Well those photos above speak for themselves and a picture can tell a story, or something like that. And on this day finds itself as Occupy Wall Street Day 990. Have a great Occupy Wall Street, Occupy Art day and more.

And so I just happen to have one of those 1st Annual FEVA, Federation of East Village Artists, HOWL! Festival of East Village Arts The HOWL! Souvenir Books lying around that I must have gotten from Tompkins Square Park years ago, that park that finds itself somewhat infamous for that 1988 Tompkins Square Park Riot that had squatters, the homeless and everyone in between running to and/or from the police that had something to do with a curfew in that park that finds itself in the Lower East Side now called the East Village for real estate marketing purposes maybe, in that city of New York.  And so this souvenir book is really cool with its East Village culture of life and history in that neighborhood during those times. And along with that Long Live The Lower East Side poem that finds itself in this book, here is another one of the many poems and photos that finds themselves in this book also that I thought interesting to post on this blog. Free the land. Squat the world.

the Lower East Side/ the East Village
ethnic neighborhood/style magnet
Ukrainians, Poles, Puerto Ricans and Blacks/ -, -, – and –
flocks of babushkas/clouds of green ringlets
strung our junkies/tranced out tourists

“US out of Vietnam!”/”US out of Iraq!”
age of innocence/age of experience
embrace the beautiful stranger/embrace the ghostly clone
acid dreams/health club mornings
who was I then?/what am I now?
(the view from the tarry roof goes on and on)

BUT STILL:
the Lower East Side/ the East Village
one and the same poets and painters and musicians/musicians and painters
and poets
free to be me/free to be you

FREE TO BE ME BEING YOU