And it’s that time where I find myself blaghing about the world news again. And I have blaghed about the world news on this blog before. And so this time between reading the headline news of polizei killings of Eric Garner and now the shooting of a Missouri teenager by polizei and the list goes on and on of seemingly the majority being black men losing their lives to the hands of legalized gun violence by the occupying army of polizei in this world since seemingly the beginning of time that wants to say Occupy the NRA. And this is what a police state looks like. And then there is the Middle East news that makes me wonder if the world is going to hell in a hand basket when there is a world at war that makes me want to say Occupy the NRA again, that in my religious fanaticism makes me want to post this Prophecy of John of Jerusalem post that I have posted on this blog before in times past. And then there is that Supermoon on this day. And I am not sure whether to say have a nice day in this blog post or not. And guns are the worst invention ever. And what if anything, does this have to do with a No Police State.

The Prophecy of John of Jerusalem VII 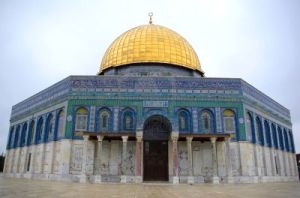 Hey again bloggers, or whoever could be reading this blog. And it’s been a blogger while since I posted one of those Temple Mount of Jerusalem that also wants to be the Dome of the Rock photos as in that photo above. And being that all eyes are on Egypt, Israel, Jerusalem, the middle east, and even Jesus himself these headline news days and web 2.0, social media, user generated content times, those religious thoughts come to mind. And so I thought to continue to post another excerpt from “The Prophecy of John of Jerusalem” on this blog in an attempt to maintain content for this blog and my other blogwhenever possible.
The birth pains increase and the blind multiply.

For the blind cannot see, no matter if Jesus stands right in front of them.

Surely Lord, is there even more to save?
When they only scoff and mock and are filled with evil thoughts?

Surely Lord, you know the hearts of men.
Is there left any man still that can be called to you Lord?

A Thousand Years
The Prophecy of John of Jerusalem

When the Year Thousand that comes after Year Thousand begins
Men will know how to make mirages live
The senses will be deceived and they will believe they are touching that which is not
They will follow paths which are seen only by the eyes
And in this way dreams will be able to come alive.

But man will no longer know how to separate
That which is from that which is not
He will be lost inside false labyrinths
Those who will know how to make the mirages live
Will take advantage of the naive man by deceiving him
And a lot of men will become grovelling dogs.

When the Year Thousand that comes after Year Thousand begins
The animals which Noah had embarked on his Ark
Will be no more in Man’s hands
Than beasts transformed according to his will
And who will worry about their lifetime of suffering?

Man will have made each species into what he wanted
And he will have destroyed numerous ones
What will the man have become who will have changed the laws of life
Who will have made the living animal a piece of clay
Will he be the equal of God or the child of the Devil?

When the Year Thousand that comes after Year Thousand begins
You must be afraid for the child of man
Poison and despair will lie in wait for him
He will be desired only selfishly and not for his own sake or for the world
He will be tracked down for sexual pleasure and sometimes his body will be sold.

But even the one being protected by his family
Will be in danger of having a dead mind
He will live inside games and mirages
Which will guide him because there will be no more educators
No-one will have taught him to hope and how to act.

When the Year Thousand that comes after Year Thousand begins
Man will think that he is God when he will be nothing more than a baby
He will hit out, always overcome by anger and jealousy,
But he will be armed with the power that he has taken
And blind Prometheus he will be able to destroy everything around him.

He will remain a dwarf of the soul and he will have the strength of a giant
He will take enormous strides forward but he will not know which road to take
His head will be heavy with knowledge
But he will not know why he lives and dies
He will be like the fire always gesticulating or the child who whimpers.

When the Year Thousand that comes after Year Thousand begins
Whole regions will be prey to war
Beyond the Roman limes and even on the former territory of the Empire, men of same cities will cut each others throats
Here it will be war between tribes and there between religious believers.

They will swarm like a remorse and a menace
They will occupy entire regions and will proliferate
They will listen to the preachings of vengeance
And they will launch an attack on the proud towers
The time of barbaric invasions will have come.