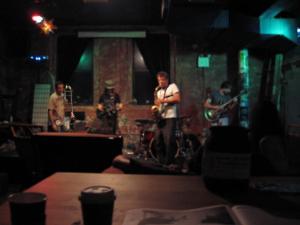 And so I somehow found myself winding up at this place called the Tea Lounge that’s this really cool lounge in Park Slope, Brooklyn with seemingly a ton of couches everywhere and people all sitting there looking at their laptops all the time drinking tea and lots of tea. And that place seems so cool that I could just sit there all day and night blah blogging away on some laptop, seemingly if they have free wi fi at least. And that place is located across the street from another place that I have heard of called the Park Slope Food Co op, or is that the Park Slope food coop? Anyway, and so my friends band “Funk Monk” was playing there that night, and so was this other band called “The Bird Hive Boys”. And Funk Monk was a jazzy night, and Bird Hive Boys was a bluesy, bluegrass sort of night that night. And their music rocked. And then there is another story of gentrification, almost genocide of yet another long time establishment that has fallen to the housing crisis of New York in this rent going through the roof, one needs ten roommates to survive era. Someone said that the Tea Lounge on 7th Avenue, or is it 10th Street will be closing at the end of this month. And will this place be replaced by yet another bank. And does the housing crisis in New York, where even the yuppies can no longer afford the rent, reflect the state of the nation and the state of the world. And there seems to be overdevelopement and a wrecking ball going through this town so fast that I can not keep track, as a new building seems to go up or out of business, or opens for business and seems to appear and disappear out of nowhere that was not there the week before, each week I walk down most any block of this city. And the landscape is changing. And it seems as if someone should keep track and write some sort of obituary for all of the businesses that are losing and have lost their lives so fast in this town for usually the sake of money. And CBGB marked an end of an area along with a host of other merchants and individuals in this city and its housing crisis of the decade 2000. And it seems as if every decade in real estate in New York has its era and is different, as New York seems to be ever changing, and the only thing constant is change. And what does the next decade hold for New York and its real estate, if anything. And will squatting and the land of the free ever arise again. And for some reason that phrase “Class War, Class War, Class War on the Poor” comes to mind. Long Live The Lower East Side. And in other thoughts I read that there is a recession and a depression, a foreclosure crisis, Uncle Sam is going broke with the European Union and the food is disappearing, and the animals are dying and disappearing and the globe is warming, and the climate is changing, and there are wars, wars, and rumors of wars, and the world seems to be spinning out of control. Is there hope for the world. And what if anything, does this have to do with a No Police State? Peace on earth and goodwill to all mankind. Have a great music day.

3 thoughts on “The Tea Lounge”