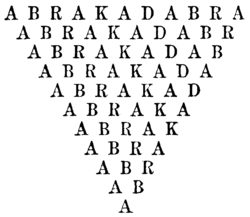 Abracadabra! Open sesame! Fire, Earth, Air, Water, Metal, Wood. It is still Halloween today. And this day could be a blessing or a curse, as that is what the word abracadabra means according to that Internet dictionary Wikipedia. “Avracadabra” is derived from the Hebrew, ha-brachah, meaning “the blessing” and dabra, an Aramaic form of the Hebrew word dever, meaning “pestilence”. And it is also the origin of the name of that fat bellied demon Abraxas, a Gnostic word for God which was thought to be a spell of great power. His name adds up to exactly 365, whatever that could mean. And it is magic and occult. And for what reason does that triangle photo placed in this blog entry look like half of a pentagram, I am not sure. And today is that scary, supernatural and mystical time of year when the devil, Satan, Christ and the spirits of the dead come to town. When Pan and the Grim Reaper awakes and witchcraft, witches, gargoyles and Gothics come out to play and when one gets to masquerade and play dress up for whoever they want to be. And in a change of topic that comes to mind, I am thinking of that great beast in Revelations, as those California wildfires are still burning and they are reminding me of Armageddon or the apocalypse or something enough to make me think it is the beginning of the end. Or maybe it is just global warming or mother nature. And I also seem to be running out of things to blah blog about these days again. And so those religious thoughts come to mind again as I ask myself, who or what is that beast that is to be found in the Book of Revelations. Who or what is this beast that seems to have its grip on mankind and the world and will not let go in the seemingly endless amount of atrocities that happen on a daily basis in the world these days that are too innumerable to mention with no end in sight. Who or what does the beast represent? Is it that beast that Babylon sits on that I posted about a few postings ago. And when I think of the beast, more thoughts come to mind; Babylon, confusion, the anti Christ, technology, the microprocessor, a cashless society, the Middle East, the European Union, globalism, security, terrorism, nuclear energy, national I.D’s, the collapse of morality, trials and tribulations, wars and rumors of wars and Satan ruling the world etc;. Are these some of the top ten prophecy signs of the beginning of the end. And again when I think of the beast I think of gun violence and glory, the worst invention of an industry ever, and all of the things that kill man, man made or nature; wars, famine, disease, plagues, wild beasts, and save no man that he may buy or sell except that he has the mark of the beast upon his forehead, or is that his right hand, for it is the number of a man, 666. Whatever that means. And who are those beasts full of eyes, and those horses that are to be found in Revelations. That could be a whole another blog posting. And much like the verse of Babylon, there is a wealth of information to be interpreted. And so to make this blog posting an even longer posting to read and possibly the longest posting I have posted yet.., I am posting that all to familiar verse to be found in the book of Revelations. If you believe. Watch and be ready. Happy Halloween.

And I stood upon the sand of the sea, and saw a beast rise up out of the sea, having seven heads and ten horns, and upon his horns ten crowns, and upon his heads the name of blasphemy. And the beast which I saw was like unto a leopard, and his feet were as the feet of a bear, and his mouth as the mouth of a lion: and the dragon gave him his power, and his seat, and great authority. And I saw one of his heads as it were wounded to death; and his deadly wound was healed: and all the world wondered after the beast. And they worshipped the dragon which gave power unto the beast: and they worshipped the beast, saying, Who is like unto the beast? who is able to make war with him? And there was given unto him a mouth speaking great things and blasphemies; and power was given unto him to continue forty and two months. And he opened his mouth in blasphemy against God, to blaspheme his name, and his tabernacle, and them that dwell in heaven. And it was given unto him to make war with the saints, and to overcome them: and power was given him over all kindreds, and tongues, and nations. And all that dwell upon the earth shall worship him, whose names are not written in the book of life of the Lamb slain from the foundation of the world. If any man have an ear, let him hear. He that leadeth into captivity shall go into captivity: he that killeth with the sword must be killed with the sword. Here is the patience and the faith of the saints. And I beheld another beast coming up out of the earth; and he had two horns like a lamb, and he spake as a dragon. And he exerciseth all the power of the first beast before him, and causeth the earth and them which dwell therein to worship the first beast, whose deadly wound was healed. And he doeth great wonders, so that he maketh fire come down from heaven on the earth in the sight of men, And deceiveth them that dwell on the earth by the means of those miracles which he had power to do in the sight of the beast; saying to them that dwell on the earth, that they should make an image to the beast, which had the wound by a sword, and did live. And he had power to give life unto the image of the beast, that the image of the beast should both speak, and cause that as many as would not worship the image of the beast should be killed. And he causeth all, both small and great, rich and poor, free and bond, to receive a mark in their right hand, or in their foreheads: And that no man might buy or sell, save he that had the mark, or the name of the beast, or the number of his name. Here is wisdom. Let him that hath understanding count the number of the beast: for it is the number of a man; and his number is Six hundred threescore and six.

4 thoughts on “The Beast”